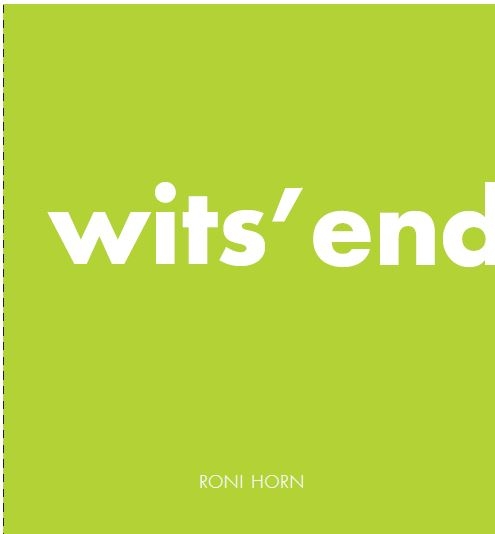 In the two series of drawings that comprise ‘Wits’ End,’ Roni Horn explores the meanings and ambiguities of language, taking handwritten idioms, clichés, and colloquialisms as her source material. Horn asked approximately 300 people to write down five of these vernacular phrases, which were then made into individual silkscreens. In ‘Wits’ End Sampler’ (2018), shown at the Menil Drawing Institute in Houston, Texas, in 2018–19, the idioms are screened in a unique configuration directly on the wall; ‘Wits End Mash’ (2019) consists of compositions of 75 to 350 idioms silkscreened on paper. These drawings—which resonate with other bodies of work in Horn’s oeuvre in which she acts as a collector not only of objects ùbut also of their meanings, memories, and mysteries—engage the “moments when language fails and connotation migrates,” with meaning that “delights in instability and movement,” as Michelle White writes in her essay included in this volume. ‘Wits’ End’ is the seventh in a series of related books by Horn on several series of works, two of which—‘bird’ (2008) and ‘aka’ (2010)—were published by Hauser & Wirth Publishers.